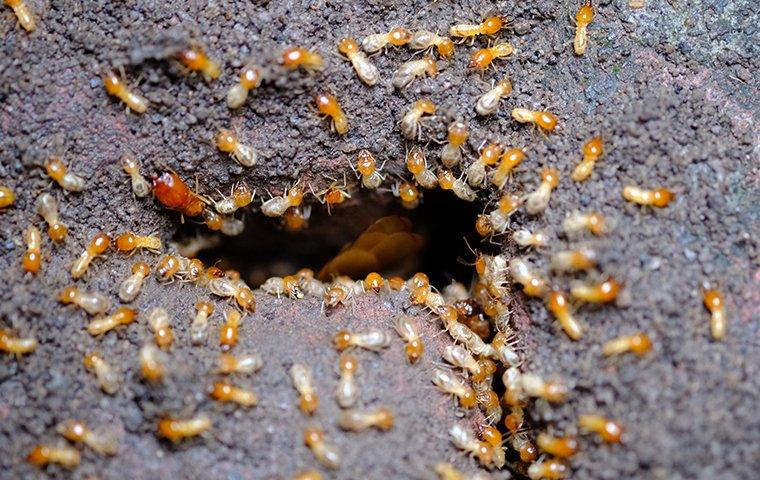 Termites are eusocial insects that live in colonies with overlapping generations. They have a caste system where different castes fulfill distinct roles within the colony. They are soil-dwelling insects that primarily consume wood. However, some termite species will also eat other materials such as paper and insulation.

While they are an essential part of the ecosystem, termites can cause serious damage to homes and other structures. In Tennessee, there are three primary types of termites that are known to infest homes: subterranean, damp wood, and Formosan.

The Eastern subterranean termite is the most common type of insect found in North America and Tennessee. They live underground, making mud tubes for safe travel between their nest and food sources!

If you think Eastern subterranean termites are eating away at your home, check for signs of an infestation near the ground and around windows. You may find softwoods that sound hollow when tapped or uneven paint with bubbling edges; discarded wings around infested areas.

Dampwood termites are most common in the West and they can also be found in the Eastern States. Dampwood termites get their name from the fact that they need wood with a high moisture content to survive. They are larger than any other species at about 1/2 in length but they don't usually invade homes.

Dampwood termites are attracted to wood that is already wet or decaying. They typically nest in tree stumps, fallen timber, or any other wood that is in close proximity to the ground and has a high moisture content.

If you think damp wood termites are consuming your home, look for signs of an infestation in areas that are constantly moist or damp such as basements, crawl spaces, or around leaks.

The Formosan termite is actually a type of subterranean Termite, but it's often differentiated due to its ability for extreme damage. Typical colony houses several thousands members; however the average Fomosan population can be anywhere from 1 million all together- making them one of the most dangerous. While they nest underground, they can also nest above ground, in trees and stumps.

This species is known to be the most destructive of all termite species in the US. They are an invasive species that was first transported worldwide from their native range in China. Formosan termites will consume anything containing cellulose including wood, paper, insulation, and even cardboard.

The presence of swarmers is the first sign of an infestation. Swarmers are attracted to light, so you may see them near windows or doors. Other signs of an infestation include wings on the ground, small holes in wood, and sawdust.

Termite damages can't be easily determined unless the damage is severe. Early detection is your best defense against termite damage.

There are some things that you can do to help prevent termite damage:

-Keep your gutters clean and free of debris so that water can drain properly away from your home.

-Repair any leaks in your plumbing as soon as possible.

-Make sure that there is adequate ventilation in your crawl space to prevent moisture buildup.

-Store firewood, lumber, and other cellulose materials away from the foundation of your home.

-Inspect your home regularly for signs of termites, such as mud tubes or wood damage.

If you think that you may have a termite problem, it's important to contact a professional pest control company as soon as possible. They will be able to properly assess the situation and recommend the best course of action.